To celebrate the release of ‘Fantastic Beasts: The Crimes of Grindelwald’ in cinemas November 16th, Warner Bros. Pictures and The Red Dragon Centre in partnership with ODEON offer you the chance to win an exclusive prize bundle from the film, plus cinema tickets for a family of four!

For your chance to win this awesome prize, simply answer our competition question by 26th November 2018. After the closing date one winner will be selected at random and contacted by email. The winner must also be able to collect from The Red Dragon Centre.

Warner Bros. Pictures’ “Fantastic Beasts: The Crimes of Grindelwald” is the second of five all new adventures in J.K. Rowling’s Wizarding World™. At the end of the first film, the powerful Dark wizard Gellert Grindelwald (Johnny Depp) was captured by MACUSA (Magical Congress of the United States of America), with the help of Newt Scamander (Eddie Redmayne). But, making good on his threat, Grindelwald escaped custody and has set about gathering followers, most unsuspecting of his true agenda: to raise pure-blood wizards up to rule over all non-magical beings. In an effort to thwart Grindelwald’s plans, Albus Dumbledore (Jude Law) enlists his former student Newt Scamander, who agrees to help, unaware of the dangers that lie ahead. Lines are drawn as love and loyalty are tested, even among the truest friends and family, in an increasingly divided wizarding world. 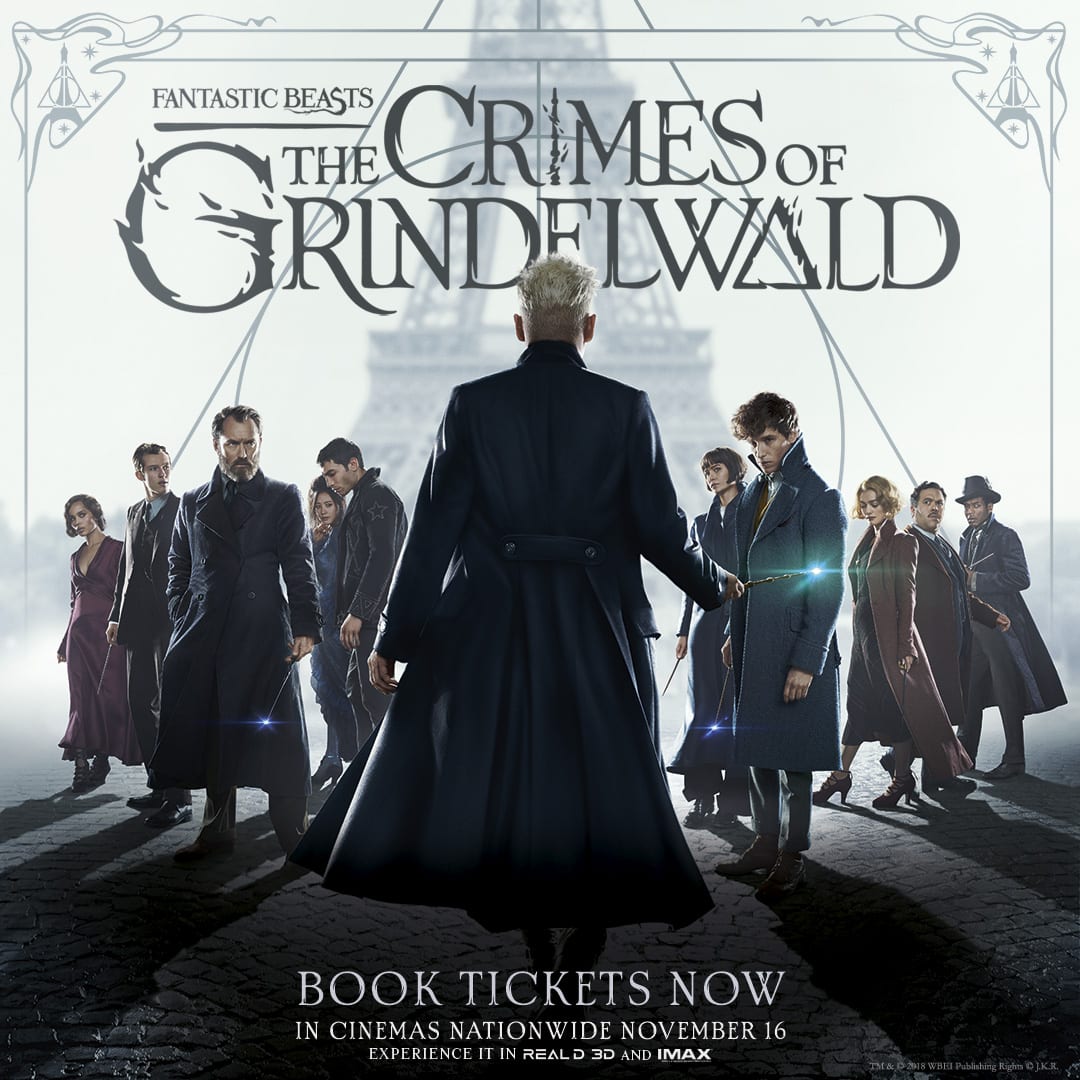 Winner must be able to collect the prize from The Red Dragon Centre; The promoter of the competition is The Red Dragon Centre; This prize can ONLY be claimed at The Red Dragon Centre; The prize draw is open to UK residents aged 18 or over; The winner will be contacted via email and will have 1 week to claim their prize; The Red Dragon Centre reserves the right to cancel or amend the competition and these terms and conditions without notice; All decisions of the management will be final and binding. No correspondence will be entered into; No cash alternative to the prize will be offered, the prizes are not transferable. Prizes are subject to availability and we reserve the right to substitute any prize with another of equivalent value without giving notice; By entering the free prize draw, the winner consents to any publicity generated as a result of the draw and use on websites, Facebook, social media platforms, magazines or mobile services at any time without further consent or payment. All data shared in entering this competition will be used for administration ONLY. We take data protection very seriously, and your data will not be shared with any third parties. Please see our privacy notice https://thereddragoncentre.co.uk/privacy-policy/ and terms and conditions https://thereddragoncentre.co.uk/terms-and-conditions/ for details.

What a joy to welcome @Jennifalconer to @RedDragonCentre ahead of her @SmoothRadio broadcast this morning 🤩 pic.twitter.com/HTYE…

A big bowl of January comfort is what we all need right now. Have you checked out #Volcano yet? Tell us what you think.... #RDCeats #japanesecuisine #cardifffoodies pic.twitter.com/Zxxm…

📞 Hello? Do you like scary movies? Because there's a BIGGIE arriving @ODEONCinemas from tomorrow! Tickets for #Scream are on sale now! 😱 🎫➡️ bit.ly/3JCSTIH pic.twitter.com/NQTK…

Veganuary eat your heart out! Loving the all new and even tastier @BellaItalia_UK menu packed with veg vibes. Can't wait to try their CarbOGGnara made with vegan pancetta and OGGS plant-based egg alternative. #RDCeats #Veganuary pic.twitter.com/JY6O…

January blues? Not here! 👊 Inside our #HappyPlace you'll find plenty to keep you entertained, excite your taste buds and keep you fit and well. Plus up to 6 hours free customer parking so you can really make a day of it! 🤩🔥 pic.twitter.com/snmf…

A @RedDragonCentre #Friyay treat if ever we saw one 😋🍔🍟 twitter.com/FiveGuys…

To help make everyone's visit to @RedDragonCentre great we’re working hard to keep our home of fun safe. Don’t forget to bring your face covering and make use of our hand sanitiser stations 😷 Find out more 👉 bit.ly/3hmWlYN pic.twitter.com/SL74…

Get over the #Januaryblues with a delicious meal at a delicious price @GCCardiff at The RDC. Their special seasonal menu is running all the way up until the 31st January, with 50% off food Sunday-Thursday. You don't want to miss out on this one...😋 T&Cs apply #RDCeats pic.twitter.com/RSkT…