The Red Dragon Centre has been transformed into Hollywood, or rather Holly-woof, as we welcomed our very own Snowdog, ‘Oscar’ this weekend. Tinsletown icons, Audrey Hepburn and Marilyn Monroe were on hand to roll out the red carpet and give Oscar a celebrity entrance including his very own Walk of Fame star – fittingly alongside the Centre’s plush venues including ODEON cinema and Hollywood Bowl. 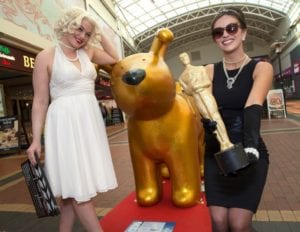 Oscar is part of the much hyped spectacular art trail, Snowdogs: Tails in Wales, which has been organised by children’s hospice charity Tŷ Hafan, public art producers Wild in Art and Penguin Random House and is inspired by THE SNOWMAN™ AND THE SNOWDOG, the animated sequel to Raymond Briggs’ iconic picture book and film THE SNOWMAN™. 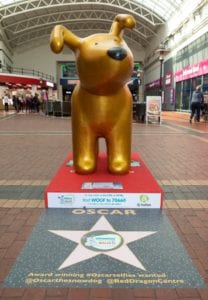 More than 40 charming 1.5m tall sculptures have been placed at South Wales’ most iconic locations and each has their own unique design with Oscar’s suitably smart façade created by professional prop maker, Maria Shrigley.
Along with all the sponsors, The Red Dragon Centre will now take part in a 10 week-long fundraising campaign to raise money for Tŷ Hafan to support children with life-limiting conditions and their families.

With all pups now in place, members of the public can follow the trail by downloading the Snowdogs: Tails in Wales app or by following the map which will be available from Tŷ Hafan shops, Visit Cardiff outlets and from the Snowdogs: Tails in Wales website. Upon finding a Snowdog, avid trail-hunters will be able to unlock a reward on the app and access discounts and promotions across the region.

Alongside the star Snowdog sculptures, 57 smaller pups have been designed by local schools and community clubs, seven of which can also be found at The Red Dragon Centre. Ice-cream experts Cadwaladers and the ODEON cinema will house the pups whose designers include Ysgol Y Deri, Greenhill Special School, Malpas Park School and Christchurch College Brecon. 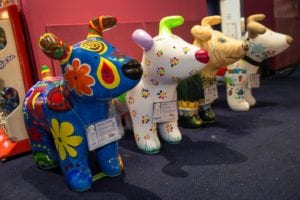 Children blown away by ‘roarsome’ workshop

Children blown away by ‘roarsome’ workshop

Pupils from Mount Stuart Primary School visited the Red Dragon Centre last month to participate in a workshop surrounding the A Dog’s Trail Snoopy sculpture, which was recently housed at the Centre as part of the 8-week long trail. Dogs Trusts’ A Dog’s Trail is a public art trail which sees intricately designed Snoopy sculptures […]

From the epic conclusion to the Jurassic era, to the origin of a Toy Story favourite, we’ve rounded up our must-see picks that you won’t want to miss at ODEON this June. To view full cinema times or to book online visit www.odeon.co.uk JURASSIC WORLD: DOMINION Release date: 10 June This June, experience the epic […]

To celebrate the Queen’s Platinum Jubilee, the Centre’s Cadwaladers store is getting in to the spirit with a feast of sweet treats! Available between 28 May – 5 June, the limited edition range will include a Jubilee sundae and Jubilee Panettone’s. Make sure you pop in store to get yours!

We think the Kids, Eat, Drink & Bowl offer @HollywoodBowlUK is simply INCREDI-BOWL! ⭐ Treat the little ones after school to a children's main course, squash and a game of bowling 🎳 Book online 👉 bit.ly/33K9lXn 📷#hollywoodbowl pic.twitter.com/HRVn…

Look who fetched £3300 at auction!! 👇🥳 What a fantastic end to @ADogsTrail which has raised so much money for @DogsTrust charity. Good luck in your forever home Snoop Draig - it was a pleasure having you for 8 marvellous weeks 🥰 pic.twitter.com/zw20…

Got to love a happy competition winner! Enjoy @HayleyPincott 😃 twitter.com/HayleyPi…

Ritchie the raptor is taking a break so the babies have come out to play! Ritchie is back out at 3pm for his final appearance - don’t miss out 🦖 #dinosatTheRDc #FathersDay pic.twitter.com/Ioxt…

The countdown is over..🦖 The long-awaited #JurassicWorldDominion has arrived @ODEONCinemas 🤩 Don't forget to take a selfie with our raptor! Thanks to the dino-mite team @fonmoncastle, Jurassic fans can enjoy this "fangtastic" display in-Centre! There's also a chance to win 👇 pic.twitter.com/kSvP…