Hi. I’m Cathryn – a mum of three and author of Cardiff Mummy Says.

I’m also the official family blogger ambassador for The Red Dragon Centre and will be posting regular updates about our visits during 2018 both here and on my blog. We’ll be giving you our verdict on the latest family film releases and dining options, as well as reporting from special themed events held at the centre throughout the year.

We love The Red Dragon Centre during the school holidays. It has everything on one site and free onsite parking (subject to minimum spend and ticket validation) too.

We visited yesterday as part of our role as family blogger ambassadors for the Centre. 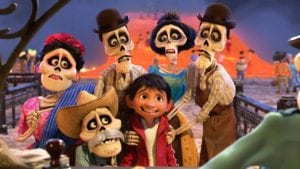 Our morning started with the 10am showing of Coco at the ODEON. We love that at the ODEON adults pay children’s prices for family films, making film trips more affordable.

What a film! The Pixar animation (rated PG) is quite unlike anything I have seen before. I have to admit I was a bit unsure when I saw the trailer a few months back because I worried that all the skeletons and the focus on Mexico’s Day of the Dead would frighten my children.

I couldn’t have been more wrong.

This is such a beautiful and heart-warming film that made me cry at the end. It follows 12 year old boy Miguel who dreams of being a musician but isn’t allowed to because music has been banned in his family for several generations by his great-great grandmother because her musician husband left her and their three-year-old daughter – the Coco of the film’s title and now Miguel’s great grandmother and the family matriarch – to pursue a career in music.

During the festival Miguel accidentally finds himself transported to the Land of the Dead – where he tries to seek the blessing of his musician great great grandfather to return to the Land of the Living. There are various plot twists and turns along the way; some beautiful Latino music; and the depiction of Mexico and the vibrancy of the festival makes you want to hop on the next plane there. 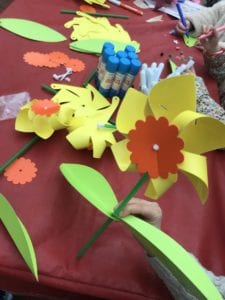 After the film we headed into the main foyer area of The Red Dragon Centre where there were free activities on offer for families – all in aid of Marie Curie’s Great Daffodil Appeal.

Marie Curie do a wonderful job of supporting people with terminal illnesses and their loved ones and their Great Daffodil Appeal is a huge fundraiser for the charity. Like many families they have helped us (you can read more about that here in my latest blog post) so we were keen to show our support.

The craft tables where children could make their own daffodil windmills were so busy and later on while walking around Cardiff Bay we saw so many children carrying them. They were simple to make with staff on hand to help. Ours have been put in a vase next to our real daffodils. And as Miss E pointed out “These ones will last a lot longer!” 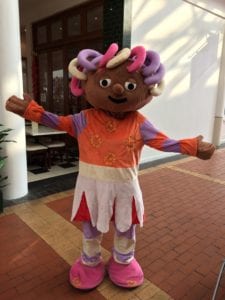 There was much excitement when character mascots Upsy Daisy from In The Night Garden and Fifi from Flower Tot Garden appeared at intervals throughout the afternoon. Children loved meeting them and having their photos taken. My daughter eight year old Little Miss E used to love Upsy Daisy – but it seems she is far too cool to give the character a hug these days. She did however suggest we name her Upsy Daffodil for the day. 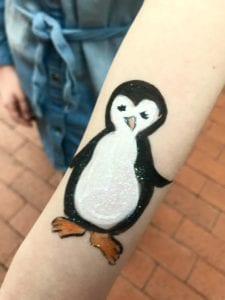 My children also loved the face painting which was also provided for free – amazing considering what it usually costs to have three children’s faces painted. Four-year-old Littlest  Boy I was Batman (he always picks Batman); Little Man O 6 was a leopard; while Miss E opted for a penguin on her arm (again far too cool to have her face painted!).

And of course we made a donation to a fantastic and worthwhile cause.