It’s the most wonderful time of the year! ✨

From brand new blockbusters to classic family-favourite back on the big screen, there’s plenty to get you feeling all festive at ODEON this month. Here are some of our top picks!

Inspired by writer, director, and star Aml Ameen’s life, Boxing Day follows Melvin (Ameen), a British author living in America, who returns home to London for Christmas to introduce his American fiancée, Lisa (King), to his eccentric British-Caribbean family. Their relationship is put to the test as she discovers the world her fiancée has left behind.

The annual CBeebies Christmas Show is back in cinemas. This year, the story is THE NIGHT BEFORE CHRISTMAS and it is sprinkled with plenty of CBeebies magic, festive music, stunning dance performances, and a star cast of presenters and on-screen talent. Fun for all the family!

When middle-schooler Emily Elizabeth (Darby Camp) meets a magical animal rescuer (John Cleese) who gifts her a little, red puppy, she never anticipated waking up to find a giant ten-foot hound in her small New York City apartment. While her single mum (Sienna Guillory) is away for business, Emily and her fun but impulsive uncle Casey (Jack Whitehall) set out on an adventure that will keep you on the edge-of-your-seat as our heroes take a bite out of the Big Apple. Based on the beloved Scholastic book character, Clifford will teach the world how to love big!

For the first time in the cinematic history of Spider-Man, our friendly neighborhood hero is unmasked and no longer able to separate his normal life from the high-stakes of being a Super Hero. When he asks for help from Doctor Strange the stakes become even more dangerous, forcing him to discover what it truly means to be Spider-Man.

From visionary filmmaker Lana Wachowski comes “The Matrix Resurrections,” the long-awaited fourth film in the groundbreaking franchise that redefined a genre. The new film reunites original stars Keanu Reeves and Carrie-Anne Moss in the iconic roles they made famous, Neo and Trinity.

As a collection of history’s worst tyrants and criminal masterminds gather to plot a war to wipe out millions, one man must race against time to stop them. Discover the origins of the very first independent intelligence agency in The King’s Man. The King’s Man is directed by Matthew Vaughn and stars Ralph Fiennes, Gemma Arterton, Rhys Ifans, Matthew Goode, Tom Hollander, Harris Dickinson, Daniel Brühl, with Djimon Hounsou, and Charles Dance. Matthew Vaughn, David Reid and Adam Bohling are the producers, and Mark Millar, Dave Gibbons, Stephen Marks, Claudia Vaughn and Ralph Fiennes serve as executive producers. The King‘s Man is based on the comic book “The Secret Service” by Mark Millar and Dave Gibbons, and the story is by Matthew Vaughn and the screenplay is by Matthew Vaughn & Karl Gajdusek. 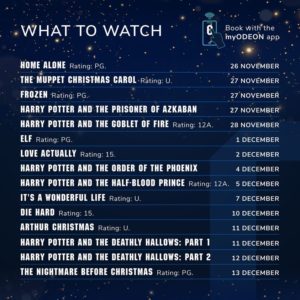 Keep it Capital this Christmas

Don’t long the dark nights and cold weather put you off this January. The magic of the big screen is calling so get down to ODEON, grab your popcorn and snuggle up with some of these brand new releases arriving this month…. More at www.odeon.co.uk  THE 355: 7 JAN A dream team of formidable female […]

We’re looking forward to welcoming visitors over this festive period and we’re working hard to keep The Red Dragon Centre safe for everyone. Our advanced safety measures also remain in place and we hope that you enjoy a safe and welcoming experience when you next visit our home of fun. Click here to view our  […]

Keep it Capital this Christmas

Hey, Josh here! It’s Christmaaaaaasssss!!!! And we’re feeling so festive with all the lush and Elftastic decorations in The Red Dragon Centre – we even met their cheeky elves Bubble and Squeak (see above!) in the studio yesterday! Here at Capital, we’re going BIG this year with the return of Capital’s Jingle Bell Ball with […]

What a joy to welcome @Jennifalconer to @RedDragonCentre ahead of her @SmoothRadio broadcast this morning 🤩 pic.twitter.com/HTYE…

A big bowl of January comfort is what we all need right now. Have you checked out #Volcano yet? Tell us what you think.... #RDCeats #japanesecuisine #cardifffoodies pic.twitter.com/Zxxm…

📞 Hello? Do you like scary movies? Because there's a BIGGIE arriving @ODEONCinemas from tomorrow! Tickets for #Scream are on sale now! 😱 🎫➡️ bit.ly/3JCSTIH pic.twitter.com/NQTK…

Veganuary eat your heart out! Loving the all new and even tastier @BellaItalia_UK menu packed with veg vibes. Can't wait to try their CarbOGGnara made with vegan pancetta and OGGS plant-based egg alternative. #RDCeats #Veganuary pic.twitter.com/JY6O…

January blues? Not here! 👊 Inside our #HappyPlace you'll find plenty to keep you entertained, excite your taste buds and keep you fit and well. Plus up to 6 hours free customer parking so you can really make a day of it! 🤩🔥 pic.twitter.com/snmf…

A @RedDragonCentre #Friyay treat if ever we saw one 😋🍔🍟 twitter.com/FiveGuys…

To help make everyone's visit to @RedDragonCentre great we’re working hard to keep our home of fun safe. Don’t forget to bring your face covering and make use of our hand sanitiser stations 😷 Find out more 👉 bit.ly/3hmWlYN pic.twitter.com/SL74…

Get over the #Januaryblues with a delicious meal at a delicious price @GCCardiff at The RDC. Their special seasonal menu is running all the way up until the 31st January, with 50% off food Sunday-Thursday. You don't want to miss out on this one...😋 T&Cs apply #RDCeats pic.twitter.com/RSkT…